You are using an out of date browser. It may not display this or other websites correctly.
You should upgrade or use an alternative browser.

So people have been telling me to shill my work harder so this is basically that
https://docs.google.com/document/d/1V-vsl9Ipa0b_7vTPTAMdaz1j2-80WD8tNiCaUt7JS58/edit?usp=sharing

so the basic idea is that she is going to be a dominant herm hyena of the striped hyena variety
she's originally from Terra but got enslaved eventually escaped and joined a mercenary band
if you have suggestions feel free to comment on the doc and if you spot grammar errors the feel free to point those out.

Doots said:
so the basic idea is that she is going to be a dominant herm hyena of the striped hyena variety... escaped and joined a mercenary band
Click to expand...

I'm down for more dommes
A

Super excited to see what comes of this

So far looking good (and that how is my reaction for more than 50% sutff I see first time) so pelase nto make me change my mind about it with more added, ok? (Sorta liked that part she seems be to those few npc that are female herms and not worry about going around topless xD ) 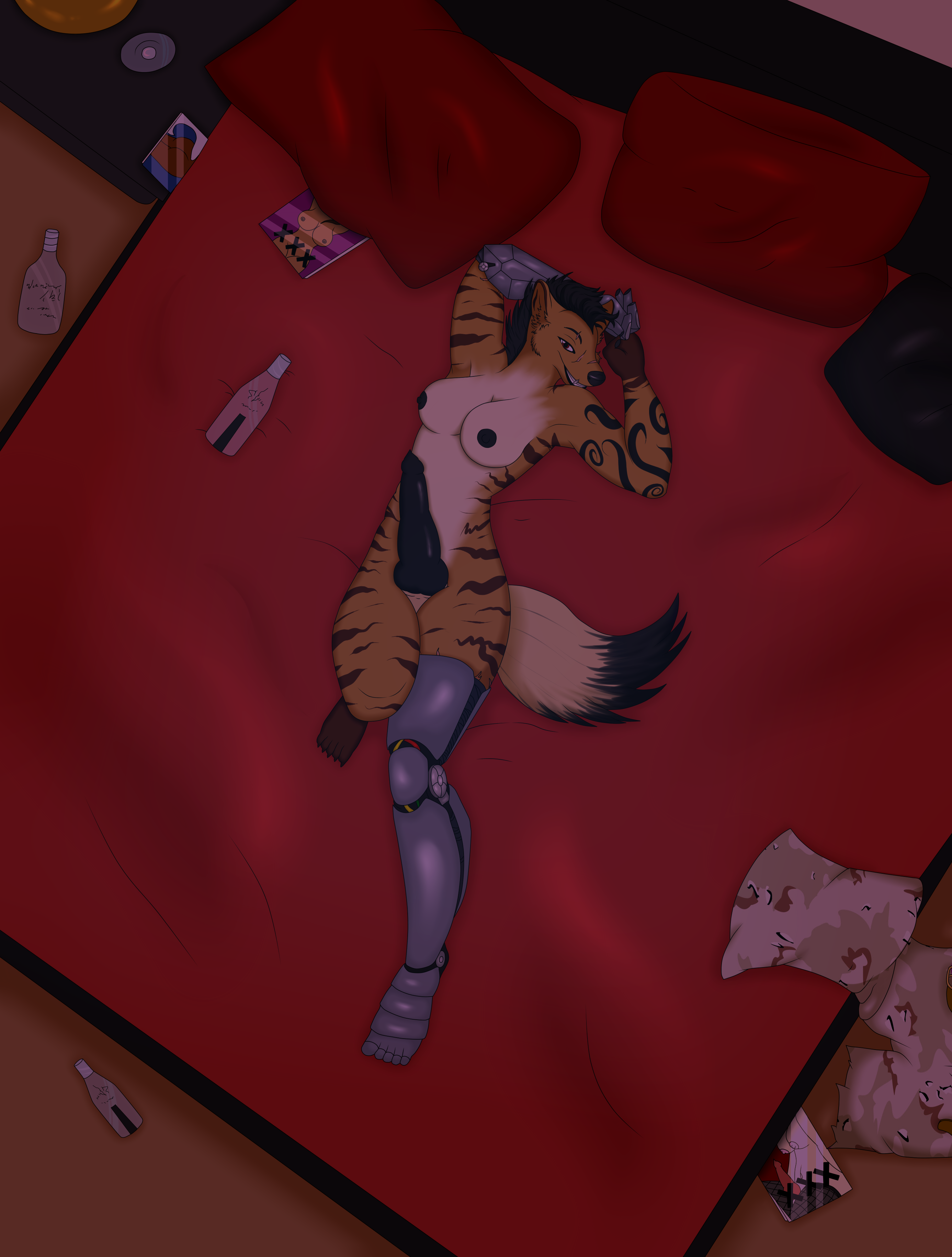 She looks like a fun lay.
Toggle signature
Raising aphrodisiac flag awareness one post at a time.
Here's my writer thread, and here's my Patreon if you want to support me!

...Sorry, i just had to get that out of my system.

It just makes me laugh giddily every time I see it.
Toggle signature
Raising aphrodisiac flag awareness one post at a time.
Here's my writer thread, and here's my Patreon if you want to support me!

Ohh, she looks goood. Wait! 'Takes a look at the apperance scene again' Damn, that bed is huge.

I'm guessing @Pheobrise got a teeny-tiny bit of flak for that in discord.
K

I've slept in bedrooms smaller than that bed.

Captain Kiera said:
I'm guessing @Pheobrise got a teeny-tiny bit of flak for that in discord.
Click to expand...

I guess i should come with actual feedback now that Verusha initial content is done, instead of a quick little joke about the art(sorry about that @Pheobrise)
Anyway, the artwork makes her look quite good, I espesially like the detail her stripes and the markings on her left arm. My only gripe would be the amount of cybernetics,( with it being too much to be a cool character trait and yet not enough to tickle the extreme side of my fetish list.) but that would be more your fault @Doots .(and of course mine too.)

When it comes to the sex scenes I have some comments on the oral scene. First, the lipstick part is super hot( both her and in the rimming scene) and should definitely make more content like it in the future.(for this character or others) Second, while i love the fact that you did oral knotting,( high on my long list of kinks) i wish it focused a little more on it like one more paragraph and some comments by Verusha. Third, i hope that in the future if you do an expansion pack, Verusha will deliver on her promise to throatfuck Steele.

PS. If this comment does not make it obvious, i've got quite a thing for oral sex.
Last edited: Jul 5, 2017
Reactions: januaryn

Captain Kiera said:
i wish it focused a little more on it like one more paragraph and some comments by Verusha.
Click to expand...


Captain Kiera said:
Verusha will deliver on her promise to throat fuck Steele.
Click to expand...

So the first pass is done, but with what happened with Erika I don't feel comfortable submitting this yet, especially since it was a one man effort on Vios part.
So if would be willing to do a second pass or even some editing that would be appreciated.

A half body line work I commissioned from @FubMistress 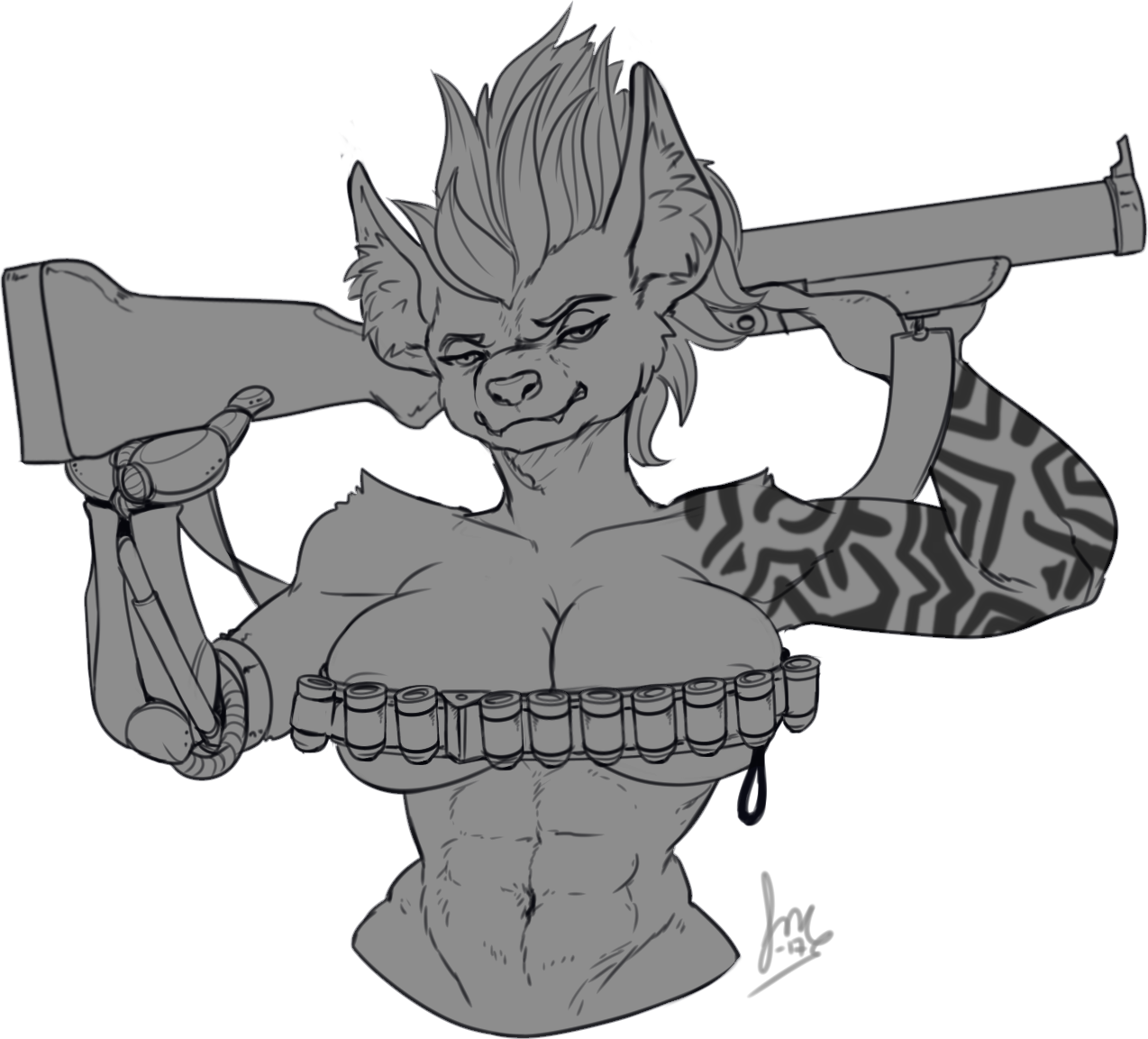 I don't understand why but the cybernetics just

! I'll give the Doc a look if I actually manage to catch anything I'll leave a note on it.

Edit: Got to the first sex chunk where she whispers into your ear and the first thing that came to mind was it could be made a possible Breaking Bad "I'm the one who knocks" reference of "I'm the one who fucks" for silly mode just replace "I'm going to fuck you" with it.

Edit 2: After reading it all I saw was a small spelling error, the rest of it seems just fine and has a good flow to it in my opinion. The scene's where she straight up rejects you, you pretty much get what you deserve especially with Sera if you talk to Verusha.
Last edited: Sep 2, 2017
Toggle signature
Pretty much the soundtrack to my life in TiTs:

Read through it all, I like it. I could complain about her dick being comically oversized but A) Considering CoC, TiTS, and FoE this is basically never an issue, and B) you actually make fun of it somewhere.

Imo it'd also make a bunch of sense if she got a crewmate expansion (which might be idea you can pursue later if you feel like it, after/if she gets implemented). Makes a lot of sense to have an experienced merc as a crewmate.
K

Doots said:
@Freed85 Thanks for taking the time to read the doc I immensely appreciate your effort
I'm still a bit unsure about submitting it to Fen
Click to expand...

You should submit it! Even if he says no he's sure to give you feedback on why.
Reactions: Freed85

ralanr said:
Imo it'd also make a bunch of sense if she got a crewmate expansion
Click to expand...

Yeah not every character needs to give up their life and become part of Steele's crew. Otherwise it would just make TiTS another harem collection game, which is not as interesting as a world where everyone has a life.
Reactions: Kesil
R

Fair point. I was thinking more to what Steele benefitted from having her rather than what she benefitted.

Went through it once. Looks quite solid. Most of what I found was punctuation, especially around dialogue, but even there not a terrible lot.

As for making her a crewmember; the only way I can see her joining Steele's crew is straight-up being hired. Could be interesting: you'd have to pay her monthly and in turn she stays on your ship and helps you in combat. Wasn't the option to hire mercenaries considered at some point? No clue what became of that.
You must log in or register to reply here.
Top Bottom